An ancient, well-built, and improving town. On the summit of a hill stands the castle, which is not ancient, but large and strong, and now serves both as the shire house and the county gaol. On the top of this castle is a square tower, called John of Gaunt's Chair, where there is a fine prospect of the mountains of Cumberland, and of the course of the Lune; the view towards the sea extending to the Isle of Man. The town hall is a handsome structure. Lancaster carries on some foreign trade, especially to the West Indies, America, and the Baltic. The exports are hardware, woollen goods, candles, and cabinet work, for the making of which last it is noted; and it has also a manufacture of sail-cloth. It is seated on the river Lune, which here forms a port for vessels of moderate size, and over which it has a new stone bridge of five elliptical arches. It is 235 miles from London. Markets, Wednesday and Saturday, and one on every other Wednesday for cattle. Population, 24,707.

Monumental inscriptions for St John with St Anne, the Friends Meeting House, and the United Reformed Church have been published by the LFH&HS.

Details about the census records, and indexes for Lancaster.

The Register Office covering the Lancaster area is Lancaster.

You can see pictures of Lancaster which are provided by:

A description of the town taken from the Imperial Gazetteer 1872.

You can see the administrative areas in which Lancaster has been placed at times in the past. Select one to see a link to a map of that particular area. 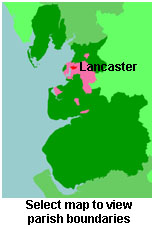 View maps of Lancaster and places within its boundaries.

Names of those who fell in WW1 transcribed from the War Memorial by Pauline Chapman.

The Workhouse site has an interesting description of Lancaster workhouse.

Penny's Almshouses were established from a £700 endowment left by William Penny (Mayor of Lancaster) in 1716. They were built for 12 poor men in 1720.