POULTON-LE-FYLDE, a small town, a township, a parish, and a sub-district, in Fylde district, Lancashire. The town stands on the Preston and Wyre railway, at the junction of the branch to Blackpool, near the river Wyre, 5 miles S by E of Fleetwood; conducted commerce as a port on the Wyre, previous to the founding of Fleetwood; is a seat of petty sessions and county courts, and a polling-place; and has a post-office under Preston, a railway station with telegraph, a police station, a church, two dis-senting chapels, a Roman Catholic chapel, a free school, a weekly corn-market on Monday, and fairs on 3 Feb., 13 April, and 3 Nov. The church was rebuilt in 1751; retains a tower of the time of Charles I.; and contains tablets to the families of Brockholes, Hesketh, and Fleetwood. The township comprises 900 acres. Real property, £3,798. Pop., 1,141. Houses, 246. The manor belonged to Roger de Poictiers, and was given to Shrewsbury abbey. The parish contains also the town-ships of Hardhorn-with-Newton, Great and Little Carleton, and Thornton-with-Fleetwood-on-Wyre, and the hamlets of Great Marton and Little Marton; and includes a great extent of coast and foreshore. Acres, 20,666. Real property, £39,367; of which £200 are in gas-works. Pop. in 1851, 7,690; in 1861, 8,665. Houses, 1,418. The living is a vicarage in the diocese of Manchester. Value, £257. Patron, the Rev.Hesketh. The p.curacies of Thornton, Fleetwood, and Marton are separate benefices. The sub-district excludes Little Marton hamlet, but includes Bispham parish and Singleton town-ship. Acres, 29,391. Pop. in 1851, 10,415; in 1861, 12,914. Houses, 2,256.

Details about the census records, and indexes for Poulton le Fylde.

You can see pictures of Poulton le Fylde which are provided by:

"Poulton (in the Fylde,) a small town in Lancashire, with a market on Monday, situated within 3 miles of Blackpool, 8 from Kirkham, 17 from Preston, and 234 from London. The parish is in the deanery of Amounderness. The living is a vicarage, value in the King's books £7 16s. 8d. and the patron is R. HESKETH, Esq. The manufacture of this part of the country consists chiefly of sail cloth. In the bathing season this town and Blackpool are much frequented, and from the shore being equal to that of Scarborough, are likely to become a fashionable resort in the summer. Poulton has three annual fairs, on the 6th of February, April 13th, and November 3d, for cattle and small wares. The population of Poulton in 1821, was 1,011 inhabitants, viz. 454 males, and 557 females, being an increase since 1811 of 85, and the population of Blackpool, was 749."

"Poulton-in-the-Fylde, a market town and parish, in the hundred and deanery of Amounderness, and in the archdeaconry of Richmond, 234 miles from London, 48 from Liverpool and Manchester, 17 from Preston and 8 from Kirkham; is a small port, under Preston, and one of great antiquity. The church, dedicated to St. Chad, is erected upon the site of the old edifice, which, having stood nearly seven hundred years, was taken down in 1751. The other places of worship are for the independents and Wesleyan methodists, Roman catholics and quakers, each of which sect have a meeting-house. This place is much frequented in the bathing season; and its real population is upon the increase; in 1811, 4,031 persons were in the whole parish, of which number 1,011 belonged to the township of Poulton."

"POULTON-LE-FYLDE, a parish and market town in the hundred of Amounderness, county Lancaster, 15 miles N.W. of Preston, 21 S. by W. of Lancaster, and 5 S.E. of Fleetwood. It is a station on the Preston and Wyre railway. It is situated near the mouth of the river Wyre, and contains the townships of Fleetwood, Poulton, Marton, Thornton, Carleton, and Hardhorn. The town is a small but very ancient port under Lancaster, and is a polling-place for North Lancashire. It was given to Shrewsbury Abbey by Roger de Poictiers. It is also a petty sessions town; the sessions being held at the Golden Ball inn on the first Friday in each month. A new County Court is held at the courthouse monthly. There is a savings-bank, also the Fylde union poorhouse. The gas works are situated at Breck. The parish is very extensive, and the soil of a clayey and heavy description, but tolerably fertile. The line of the Preston and Wyre railway passes a little to the E. of the town, which is much frequented in the summer for sea bathing. The living is a vicarage in the diocese of Manchester, value £257. The church, dedicated to St. Chad, occupies the site of an ancient structure. The present church was rebuilt in 1751, with the exception of the tower, which is of the time of Charles I., and contains a clock and six bells. The church has tablets to the families of Brockhole, Hesketh, and Fleetwood. In addition to the parish church are the following district churches, viz: at Marton, Thornton, and Fleetwood, the livings of which are all perpetual curacies, varying in value from £150 to £105. The churches are modern. There is a free school for both sexes. The Independents, Wesleyans, Society of Friends, and Roman Catholics have each a place of worship, and the last have also a small cemetery. Market day is on Monday for the sale of corn. Fairs for cattle and sheep are held on 6th February, 13th April, and 3rd November."

"SKIPPOOL, a hamlet in the parish of Poulton-le-Fylde, county Lancaster, 1 mile N.E. of Poulton, and 10 miles S.W. of Lancaster. It is a sub-port to Preston. It is situated on the line of the Preston and Wyre railway at the point where the Skippool river falls into Wyre Water."

In 1835 the parish of Poulton contained the townships of Poulton, Thornton, Carleton, Hardhorn with Newton and Marton.

You can see the administrative areas in which Poulton le Fylde has been placed at times in the past. Select one to see a link to a map of that particular area. 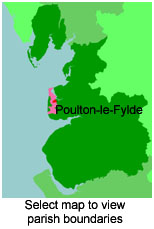 View maps of Poulton le Fylde and places within its boundaries.