WALNEY, an island and a chapelry in Dalton-in-Furness parish, Lancashire. The island is separated from Lower Furness by a narrow strait; adjoins, in its central part, the harbour and town of Barrow-in-Furness; extends south-south-eastward, from the month of the Duddon's estuary to the N side of the entrance of Morecambe bay; measures 8 miles in length, and nowhere more than 1 mile in breadth; is low, flat, and distributed into about a dozen farms; contains two small villages; is surmounted, at the S end, by a lighthouse 68 feet high, erected in 1790; and has a post-office under Barrow-in-Furness. The chapelry includes one or two neighbouring islets; and its statistics are returned with the parish. The living is a p. curacy in the diocese of Carlisle. Value, £140. Patron, the Vicar of Dalton. The church is recent. There is a national school.

Details about the census records, and indexes for Walney.

The Register Office covering the Walney area is Barrow in Furness.

You can see pictures of Walney which are provided by:

"ISLE OF WALNEY, a chapelry in the parish of Dalton in Furness, hundred of Lonsdale North of the Sands, county Lancaster, 5 miles S.W. of Dalton. This place, which is insular at high water, is situated between Morecambe Bay and the river Dudden, opposite the village and port of Barrow, which is reached by a ferry. It contains the villages of North Scales and Bigger. A lighthouse was erected in 1790 at the southern end of the island, which has a revolving light 70 feet high, and visible for 13 miles. The sea is gradually encroaching upon the land, which was formdrly an extensive forest, but has now scarcely a tree. Several rare plants grow here, and at North Scale is an intermittent well. On the northern extremity of the island stands the castle of the "Pile of Fouldrey," erected in 1327 by the Abbot of Furness for the protection of the inner harbour. It was once of consiDerable strength, but is now a ruin. The living is a perpetual curacy in the diocese of Carlisle, value £90, in the patronage of the Vicar of Dalton. The church, dedicated to St. Mary, was restored in 1856. A National school has been recently erected.

"FOUDRAY, (or Peel Of Foudray), a small island near Walney Island, county palatine Lancaster. On it stand the ruins of a tower built by the abbots of Furness."

"PIEL, (or Peel Of Fouldrey), an islet in the chapelry of Walney, parish of Dalton-in-Furness, county Lancaster, 6 miles S. byW. of Dalton. It is situated in Morecambe Bay, near Walney Island, and has the remains of an old castle of the Abbots of Furness. Lambert Simnel and his adherents landed here in 1487. There is a line of railway from Piel Pier to Broughton."

"FOULNEY, an island in the parish of Dalton-in-Furness, hundred of Lonsdale North of the Sands, county palatine Lancaster, 7 miles S.E. of Dalton."

"BIGGAR, a hamlet in the chapelry of Walney, and parish of Dalton-in-Furness, hundred of Lonsdale, in the county palatine of Lancaster, near Dalton. It lies near the coast of Morecombe Bay."

In 1835 Walney was a chapelry in the parish of Dalton in Furness.

You can see the administrative areas in which Walney has been placed at times in the past. Select one to see a link to a map of that particular area. 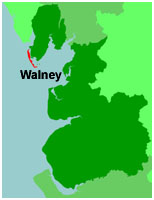 View maps of Walney and places within its boundaries.