ECCLES, a village and a parish in Lancashire. The village stands on the river Irwell, and on the Manchester and Liverpool railway, 4 miles W of Manchester; and has a station on the railway, and a post office under. Manchester. Races are run, on an oval course of ¾ of a mile, in August; and fairs are held on the Friday before Whit-Monday and on 15 Nov. The parish contains the townships of Pendleton and Pendlebury, in the district of Salford, and the townships of Barton-upon-Irwell, Clifton, and Worsley in the district of Barton-npon-Irwell. Acres, 20,240. Real property, £180,121; of which £17,804 are in mines, £1,047 in iron-works, and £48 in railways. Pop., in 1851, 41,497; in 1861, 52,679. Houses, 9,963. The property is much subdivided. The township of Pendleton, and part of that of Pendlebury, with jointly a pop. of 21,562, are within the borough of Salford; and about 7,000 acres are in Chatmoss. Many of the inhabitants are employed in cotton and silk mills. The living is a vicarage in the diocese of Manchester. Value, £900.* Patron, the Lord Chancellor. The church belonged anciently to Whalley abbey; contains monuments of the Breretons and the Booths; and is in good condition. The chapelries of Ellenbrook, Pendleton, Swinton, Walkden, Worsley, Pendlebury, Hope, Weaste, Patricroft, Irlam, Barton-upon-Irwell, Paddington, and Charleston, are separate charges. There are chapels for Independents, Baptists, Presbyterians, Wesleyans, New Connexion Methodists, and Roman Catholics. An Independent chapel at Eccles village was built in 1860, at a cost of £5,500; is in the early English decorated style; and has a spire 120 feet high. Two schools have £34 from endowment; and other charities £43. Ainsworth, the lexicographer, was a native; and the Right Hon. W. Huskisson, after sustaining a deadly accident at the opening of the railway, died in the parsonage.

Details about the census records, and indexes for Eccles.

The Register Office covering the Eccles area is Salford.

You can see pictures of Eccles which are provided by:

"ECCLES, a parish and extensive suburb of Manchester, in the hundred of Salford, county palatine of Lancaster, 4 miles W. of Manchester. It is a station on the London and North-Western railway. The parish, which is very extensive, is situated near the river Irwell, and contains the townships of Barton-upon-Irwell, Clifton, Pendleton, Pendlebury, and Worsley, besides a large number of hamlets Chat Moss is partly in this parish. Coal is obtained in large quantities, and silk and cotton weaving are extensively carried on. The living is a vicarage in the diocese of Manchester, value £500, in the patronage of the lord chancellor. The church is an ancient stone structure, in the early English style of architecture. It is dedicated to St. Mary, and anciently belonged to Whalley Abbey, but at the Dissolution was made parochial. It contains a brass, and monuments of the Brereton and Booth families. The register is very old. There are also district churches in the several townships. The parochial charities produce about £80 per annum, of which between £30 to £40 is for the schools. The Wesleyans, Roman Catholics, and New Connexion Methodists have each a chapel. There is a grammar school with a small endowment, also National and infant schools, besides Sunday-schools attached to each of the places of worship. This was the birthplace of Ainsworth, the lexicographer. Sir Humphrey de Trafford is lord of the manor, and owner of most of the soil. Races are held here in August."

"MOLYNEUX BROW, a hamlet in the parish of Eccles, county Lancaster, 5 miles N.W. of Manchester. It is a station on the Manchester and Accrington branch of the Lancashire and Yorkshire railway. The inhabitants are chiefly engaged in the neighbouring collieries and cotton mills."

"LITTLE HOUGHTON, a hamlet in the parish of Eccles, county Lancaster, 6 miles N.W. of Manchester. The inhabitants are chiefly engaged in the hat trade and in the collieries."

In 1835 the parish of Eccles contained the townships of Clifton, Pendlebury, Worsley, Pendleton and Barton upon Irwell.

You can see the administrative areas in which Eccles has been placed at times in the past. Select one to see a link to a map of that particular area. 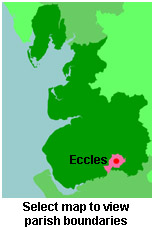 View maps of Eccles and places within its boundaries.