OLDHAM, a town, a township, several chapelries, two sub-districts, and a district, in Lancashire. The town stands on an elevation between the rivers Irk and Medlock, near the source of the former and near the W bank of the upper part of the latter, on branches of the Northwestern and the Lancashire and Yorkshire railways, at the junction-terminus of the Oldham, Ashton-under-Lyne and Guide-Bridge railway, and at a branch canal from the Rochdale and other canals, 7 miles N E of Manchester. The Roman road from Westmoreland into Yorkshire passed through its site, and can still be traced in the vicinity; but scarcely any other vestiges of antiquity about it either meet the eye or figure on record. The town, in despite of its name, is all comparatively modern, and makes little or no appearance in history. It originated in the introduction of textile manufactures, seemingly in the time of Charles I.; it acquired an impulse by the introduction of the factory-system about the year 1770; it acquired a still greater impulse by the expiration of Arkwright's patents in 1783 and 1789, and by the introduction of the steam-engine; it got great advantage from the existence of numerous and valuable coal mines in the immediate vicinity; it reaped benefit from successively the water-power of the neighbouring streams, the formation of the canals, and the formation of the railways; and, under combination of these advantages with local enterprise and skill, it rose, within the limits of the township, from a pop. of 12,024 in 1801 to a pop. of 72,333 in 1861. more ...

The best source of local information is:

The person to contact about all the public cemeteries in Oldham is:

The records for the municipal cemeteries are held at Hollinwood Cemetery:

Monumental inscriptions for the following graveyards have been published by the LFH&HS.

Details about the census records, and indexes for Oldham.

The following Church of England registers are to be found at the Oldham Local Studies and Archives:

They also have non-conformist registers.

You can see pictures of Oldham which are provided by:

"GREENACRES MOOR, a village in the parish and township of Oldham, hundred of Salford, county palatine Lancaster, in the vicinity of Oldham, and 7 miles N.E. of Manchester."

"GLODWICK, an ecclesiastical district in the parish of Prestwich, county palatine Lancaster, 2 miles from Prestwich. The living is a perpetual curacy in the diocese of Manchester, value £150, in the patronage of the crown and bishop alternately."

"WERNETH, an ecclesiastical district in the parish of Prestwich, hundred of Salford, county Lancaster, 1 mile S.W. of Oldham. It is a station on the Lancashire and Yorkshire railway. It is a suburb of Oldham."

"WATERHEAD, a chapelry in the parish of Prestwich, hundred of Salford, county Lancaster, 1 mile S.E. of Oldham, and 7½ miles N.E. of Manchester."

"COLDHURST, a village in the parish of Prestwich, in the county of Lancaster, near Manchester. The living is a perpetual curacy in the diocese of Manchester, value £150, in the patronage of the crown and bishop alternately."

In 1835 the parish of Oldham contained the townships of Oldham, Crompton, Royton, Chadderton, Tonge and Alkrington.

You can see the administrative areas in which Oldham has been placed at times in the past. Select one to see a link to a map of that particular area. 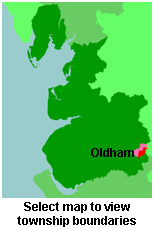 View maps of Oldham and places within its boundaries.

The Workhouse site has an interesting description of Oldham workhouse.

Oldham Local Studies and Archives Library holds a full set of Burgess Roll and Electoral Registers going back to 1850 but the complete run covers the town of Oldham only. There are gaps during both World Wars when registers were not published.