KIRKHAM, a small town, a township, and a sub-district, in Fylde district, and a parish partly also in Preston and Garstang districts, Lancashire. The town stands near the Preston and Wyre railway, 3 miles N of Naze Point on the Ribble estuary, and 8 WNW of Preston; has been regarded as the capital of the Fylde country; comprises several well built streets; has a good supply of water, and fair sanitary arrangements under a local board of health; is a seat of petty sessions and county courts; and has a post office under Preston, a railway station, a magistrates' office, a church, Independent and Wesleyan chapels, a Roman Catholic chapel, a reading room and library, a free grammar school, a girls' charity school, a national school, a workhouse, and some charities. The church succeeded a Norman one, which was given by Roger de Poitiers to Shrewsbury Abbey, and by Edward I. to Vale-Royal abbey; comprises a nave of 1822, a tower and spire of 1844, and a chancel of 1853, together with a N transept; and is convenient and spacious. The Roman Catholic chapel is at the Willows, ½ a mile from the town; was built in 1845, after designs by Pugin; is in the early English style; and consists of nave, aisles, chancel, and porch, with tower and octagonal spire. The grammar school was founded in 1658; affords both an English and a classical education; and has £596 a year from endowment, and two exhibitions of £60 a year to Cambridge. The workhouse is that of the Fylde district; has attached to it large garden ground; and, at the census of 1861, had 110 inmates. Fairs are held on 4 and 5 Feb., 28 and 29 April, and 18 and 19 Oct.; and there are flax mills in the town, and cotton mills in the adjoining township of Medlar-with-Wesham. The town and the township are regarded as conterminate. Acres, 840. Real property, £7,450; of which £162 are in gas works. Pop. in 1851, 2,799; in 1861, 3,380. Houses, 616. The sub-district contains also the townships of Freckleton, Warton, Bryning-with-Kellamergh, Ribby-with-Wrea, Westby-with-Plumpton, Weeton-with-Preese, Greenalgh-with-Thistleton, Cliftonwith-Salwick, Newton-with-Scales, Medlar-with-Wesham, Little Eccleston-with-Larbreck, Treals, Roseacre, and Wharles, and Elswick. Acres, 31,464. Pop. in 1851, 8,464; in 1861, 9,141. Houses, 1,740. The parish contains all the sub-district, except Elswick township; and contains also the townships of Whittingham, Goosnargh-with-Newsham, Great and Little Singleton, and the chapelry of Hambleton. Acres, 48,530. Real property, £73,737. Pop. in 1851, 10,926; in 1861, 11,445. Houses, 2,191. The living is a vicarage in the diocese o Manchester. Value, £1,080.* Patron, Christ Church, Oxford The p. curacies of Goosnargh, Great Singleton, Hambleton, Lund, Ribby-with-Wrea, Treales, Weeton, Whitechapel, and Warton-with-Freckleton, are separate benefices.

The following books contain useful information about the history of Kirkham and the surrounding area.

Details about the census records, and indexes for Kirkham.

The Register Office covering the Kirkham area is Blackpool & Fylde.

You can see pictures of Kirkham which are provided by:

In 1835 the parish of Kirkham contained the townships of Kirkham Hambleton, Singleton, Larbreck with Little Eccleston, Greenhalgh, Weeton with Preese, Medlar with Wesham, Treales, Roseacre and Wharles, Westby with Plumpton, Ribby with Wrea, Bryning with Kellamergh, Warton, Freckleton, Newton with Scales, Clifton with Salwick, Goosnargh and Whittingham.

You can see the administrative areas in which Kirkham has been placed at times in the past. Select one to see a link to a map of that particular area. 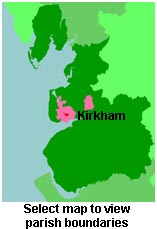 View maps of Kirkham and places within its boundaries.